I just wanted to do a really quick review for you on this the bachelors cup of soup in tomato flavor.

In this pack that you get for roughly about just under 2 pounds there's for such tools in there.

I've actually eaten all the satchels it's really it's really cute you can close the lid at the top like that once you've opened it.

No like creepy crawlies or anything like that could get in and it has all satchels like that in there no I've eaten all the other satchels because it's.

Delicious each box consists of four satchels what I love about it has no artificial colors or preservatives in it.

That's a really big bonus me it says on the back that is also low in fat and no added preservatives another thing I love about. This is that. This is not the only flavor they have of copper suit they also have all sorts of flavors like asparagus potato and leek Prime Minister only other various flavors as well you get a lot of variety these are also I believe suitable for vegetarians there's a little symbol over there and really vegans too because there's no there's nothing in here that is dairy yeah there's nothing in here that story.

There should be little vegan cyan't it I love these these are really good for when you just want a snack and you don't want to like over e or you're not really that hungry and you just want to pick something up quickly it's just delicious I love having like a cup of soup like all the different flavors and I just like dipping toast in there it just tastes.

Delicious especially when I'm stick I always. This is my go to the bachelors cup of soups but when I'm sick the only thing that I don't like about. This is that i think they could put a bit more they could show a bit more cup of soups into this box because I keep having to go back to the shops and go pick up another packet because I keep running out because I have these quite frequently like in a week I think I drink like that for in a week or four or five roughly nearly every day basically.

It really would be helpful if they put more in a pack.

I wouldn't have to keep running to the store to go get another packet I really do love these I really would recommend these to anyone because they are.

Tasty and delicious and they're low in fat as well.

You don't put on a lot of weight they're just a delicious great snack it's really flavorful and yummy well I hope you guys liked this video and if you did please forward it to your friends and family check out my other videos too and subscribe to this channel you can also follow me on instagram and twitter at bobbys vlog that's Bo BBY s VL OG and don't forget to subscribe and check out my other channels my Bobby's Food Channel my Bobby's vlog channel my Bobby's workout channel I'm on Bobby's animal tunnel bye guys toodles cailloodles. 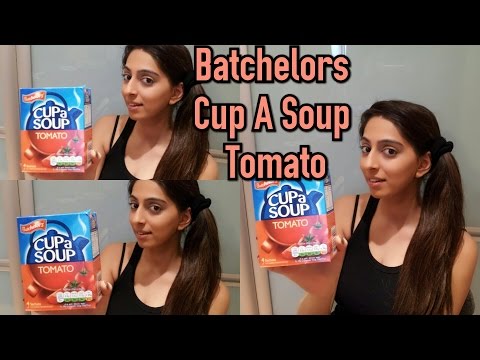 by: Bobbys Food 2 minutes to read

Hi guys. I just wanted to do a really quick review for you on this the bachelors cup of soup in tomato flavor. In this pack that you get for roughly about just under 2 pounds there's for such tools in there. I've actually eaten all the satchels it's really…