Hey everybody! it's christina from creations with christina and we are now starting her next cricut cartridge series in this series we're going to be working on the sweet treats cartridge.

I thought i would combine my basics video with the with a project.

But first let's just go over some of the functions that the cartridge has this cartridge is is just.

Cool it has a lot of stuff on it it has layers and shadow blackout has a tag cards cupcake holder and party favors.

Today we're going to work on the cards feature.

I'm cutting everything out of five and a half inches and i'm using a just a pretty thin white cardstock.

I'm going to change my pressure on this down too high and i'll change my blade to five.

We're going to hit the cards function key the present and everything for this again is at five and a half inches ok.

The next thing we're going to cut out is the layer for the the presence.

We're going to cut that out now on this patterned paper.

The next thing I'm going to cut out is because I want also on this pattern paper is the layers key for the the bow.

We're just going to go ahead and cut that out.

We're going to hit layers shift and the present. Okay.

The next thing we're going to cut out is the layer key and that what that is is the top of the present.

I'm just going to go ahead and cut that out.

The last thing we're going to cut out is just the regular present function key.

We're just gonna make sure all of our layers are off I'm going to hit present and everything is cut at five and a half inches. Okay.

Now that we have everything cut out go ahead and assemble our card and just.

You know that the five and a half inches does fit into a regular a to size envelope so. This is just. This is the card folded in half and see it fits perfectly.

I'm thinking I might use this as an invitation my son's birthday is coming up next month.

Maybe I'll use this as the invitation for his party um.

Let's go ahead and start assembling our card.

In front of the card has a little bit of of interest to it.

See that gave it just a little bit of depth to it the next thing I'm going to do is I cut out the center part for my bow in the same pattern as i did my present and because. This is i've already used dimensionals there i'm going to need to pop this with two dimensionals.

There's one and then I'm just going to hear the other one right on top of that one.

I'm just sorry about the huge atg going coming in there I'm just gonna go ahead and add my adhesive and then I'm going to line this up right on the front of my card starting at the top with my bow.

I know I have it all lined up. Okay, and there we go and then you could just stamp here you're invited or happy birthday or if you want to cut out a happy birthday you're invited you can go ahead and do that so. Okay, thanks for watching another episode of crisis with Christina I'll see you next time bye.

by: Faithabigaildesigns 2 minutes to read

Hi everyone. This is my first youtube video and I wanted to showcase a project that I made I made a toilet paper roll mini album i use the momenta birthday wishes super paper pads Zack and I used the momenta sweet shop glitter puffy stickers and the momentous…

by: Obsessedwithscrappin 3 minutes to read

Hi. This is joy with the first simple card Monday of 2010 I'm really excited about it I decided to make this ice cream cone card probably on a lot of people's mind these you know these last few days is New Year's resolutions in one of mine is to not easy… 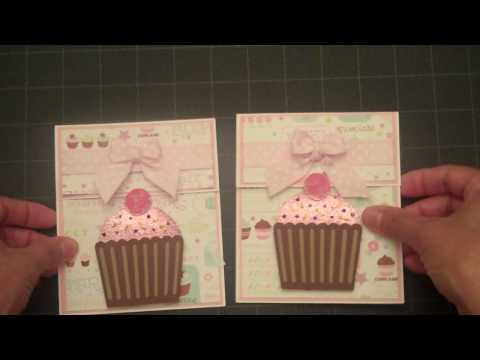 by: Maxandshoji 3 minutes to read

Hello everyone. This is Laraine from card creations and today we're going to make a cupcake card using the sweet treats cricut cartridge and. This is a card base that i came up with and it opens up like this it's got a little flap at the top and then…