Okay now we've progressed through several time value money problems and we talked about doing loans that's what we're going to do this time but there's another function in your calculator that will it's called the amortization function or amortizes a loan which we've talked about loans where some of the you know the payments are all the same amount but part of the payment is interest part of that payment is principal and those amounts of principal and interest amounts change every month even though the payment stays the same but the calculator has the ability to break out of each payment or a group of payments how much is interest and how much is principal as well as tell you the remaining balance after a period of time.

That's what we're going to cover here it's very simple but you got to get the steps right or you'll just have a big mess.

Here's an example a $300,000 loan at 4.9 percent annual percentage rate for 30 years with monthly payments the question is how much principal in the first month how much interest in the first year how much interest in the eighth year which is probably the only difficult one holidays and the remaining loan balance after 15 years well to answer these questions when you have something like this the first thing you must do is make the calculator compute the payment if you don't compute the payment you're not going to get the right answer you'll get answers but they'll be way wrong all the time.

That's what we're gonna do first.

We're going to start with the $300,000 it's good house as the present value 4.9 percent APR with monthly payments.

We're going to take the 4.9 as the interest rate divided by 12 to get the interest for 30 years monthly payments.

30 times 12 because we don't change our settings here.

That's in now you just compute the payment. Okay, 1592 dollars and 18 cents every month you don't have to write it down you do anything what they just leave it in the calculator and now we're just going to go now the buttons were going to the new buttons the new areas one is this input button and the second one will be the after you ship future value see am Mort or amortization underneath the future value key all you have to do is tell the calculator what range of payments you're talking about and since the payments are monthly and n is in months you're gonna have to tell it which month number which payment number or talked about.

Or start with one then you input that and then the second the ending one which is one again.

One and then we do the shift' amortization function and it should they will tell you what period what range of payments you're talking about.

One to one and then the tricky part you just start hitting equal sign and when you hit the equal sign first it tells you in the box that. This is the principal.

For the first payment of $1500 almost $1,600 you pay three hundred and sixty seven dollars a principal.

That's the answer to question number one three sixty seven eighteen as you continue to hit equals it will scroll through.

Principal is what comes up first interest in that first month comes up next and when you hit equals again it will give you the loan balance after the first payment which will be after the first payment as the three hundred thousand minus that principal that we had for the answer to question number one and if you kind of missed one you can keep scrolling through it goes back to the period principal interest you just keep hitting equals and there you go.

It's one and you got to start all the way over with the inputs not with the payment leave you don't recompute the payment just leave it there don't hit shift clear leave it all there.

One input for the first month twelve shift and Mort amortization.

You have period one through twelve which will be the first year and the principal is forty-five hundred and six dollars you hit equals again there's the interest.

Fourteen thousand five ninety nine sixty nine a lot of interest in the first year a lot more than principal.

If you take seven times 12 equals.

The seventh year if you weren't sure ends with month 84 well that means the eighth year starts with month 85 payment number 85.

85 is the first one then 12 times eight would be the end of the eighth year that's going to be 96 and then just do shift amortization or and you have 85 296 now get some people get confused because that looks like eleven periods but remember the first one was one through twelve which also kind of looks like eleven periods but. This is correct and then just hit equals.

When we do the last one it's 15 years. Okay, at the end of the fifteenth year.

It doesn't matter what you put in first I can put one input and 15 times 12 is 180 and I can input that and see that would be backwards sometimes you got to be careful.

One input 180 shift amortization that's better then when you hit equals we'll get to the balance two hundred and two thousand six seventy 208. Okay, it doesn't again it doesn't matter what I put in for the first part of the range I can put 180 input 183 in or shift amortization again and then when I hit equals all the way through the balance the interest and principle numbers of course will be different but the balance amount after the 15th year is still 202 670 208.

That's how that works just remember the main thing you have to compute the payment first and as you can see with my little mistake there and if I could edit this cleanly I would start there again and I would edit all that out but it's too much work and I have no idea what I'm doing with this.

I'm just going to leave it in there it's just like class I'm gonna make mistakes if you're lucky I'll catch it.

Anyway, make sure it computes the payment first leave it in there do not clear all until you finish anything it's asking for.

Good luck with that one and see you in class. 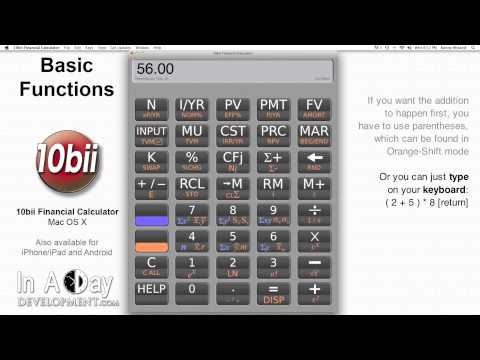 by: InADayDevelopment 2 minutes to read

Hi. This is tiffany from in-a-day development welcome to our video tutorial on basic calculator functions a lot of financial calculators use reverse polish notation or postfix notation but the 10 bay too lets you enter equations the same way you learn…

by: Tyler Sheff 2 minutes to read 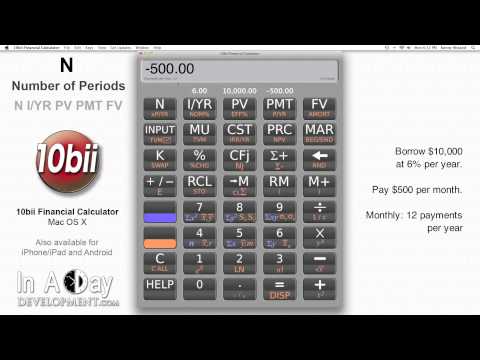 Hi. This is Kenny from in a day development welcome to our video tutorial on the N key if you want to calculate how long it will take to repay a loan you will want to solve for n n or a number of payments or a number of periods represents the length of…