Hi though in this video we're going to be unboxing the turtle beach recon 50x headset it says xbox one but it is compatible with the PlayStation 4 it also says PC Mac and mobile for PCs you may need a PC splitter cable now I got this from Carthage for $29.99 that's the Argos code.

It's just under 30 UK pounds now it will only work with the newer Xbox 1s controllers or the older version but the newer older version the ones with the 3.5 jack if you're using the original Xbox one controller then you're going to have to get the headset adapter they cost around 20 pounds and that will allow you then to plug in a 3.5 jack into the adapter it's got volume control and mic mute in line and it's a 3.5 millimeter jack I've got a removable microphone a 40 millimeter speaker let's see what's inside. All right, so. This is the removable mic that's useful because sometimes if you wanted to watch a movie and hear the sound coming through the headset then you wouldn't necessarily what there might be in your way and as you can see it's flexible the length of that is approximately just under 200 millimetres just under 20 centimeters you can pause it to read it in more detail [Applause] to the contacts an event I like swivel adjustable here they don't serve all this weight now there you go just to give you an idea of the size let's quickly measure how long the lead is.

We got Mike on and like off we've also got plunging yes that's it.

You can just mute the mic and do the volume control or the other settings you will have to do via either Xbox one S or the console itself what lead looks quite short right you're looking at about 1.2 meters from the very tip of the plug 120 centimeters from the very tip of the flash to where it meets the headset there's quite a short lead but it's long enough because it only needs to go from the controller to your head the microphone slots into this port here and if you have a look you can see there's a little notch taken out of it here and there is a little tab there that you have to line up.

If you ever look there is a line here to help you and a little line here you just line up the lines like.

And push it all the way in like that and if you have a look which is a 3.5 millimeter plug but it's 4-pole.

It's going to have stereo audio.

Left and right and also microphone. Okay, I hope you enjoyed the video give it a thumbs up if it helped you out take care bye now.

by: XBOX ALL IN 12 minutes to read 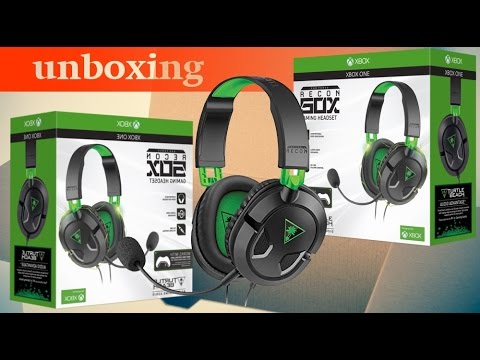 by: TheSoundOfGaming 3 minutes to read

Hi hello and welcome to the sound of gaming today I'm unboxing or trying to unbox the new headsets I just bought my xbox Xbox one that is obviously and they're Air Force Recon 50x. It's really good and good price as well. I will start to embark some one-handed…

by: SlayerKing20 1 minute to read

Hello everybody it's like me here and welcome to an unboxing video on a turtle beach headset it's the Recon 50x gaming headset designed for the xbox one um. We're going to read all these facts. Okay, I know this it says comfortable over ear design large…